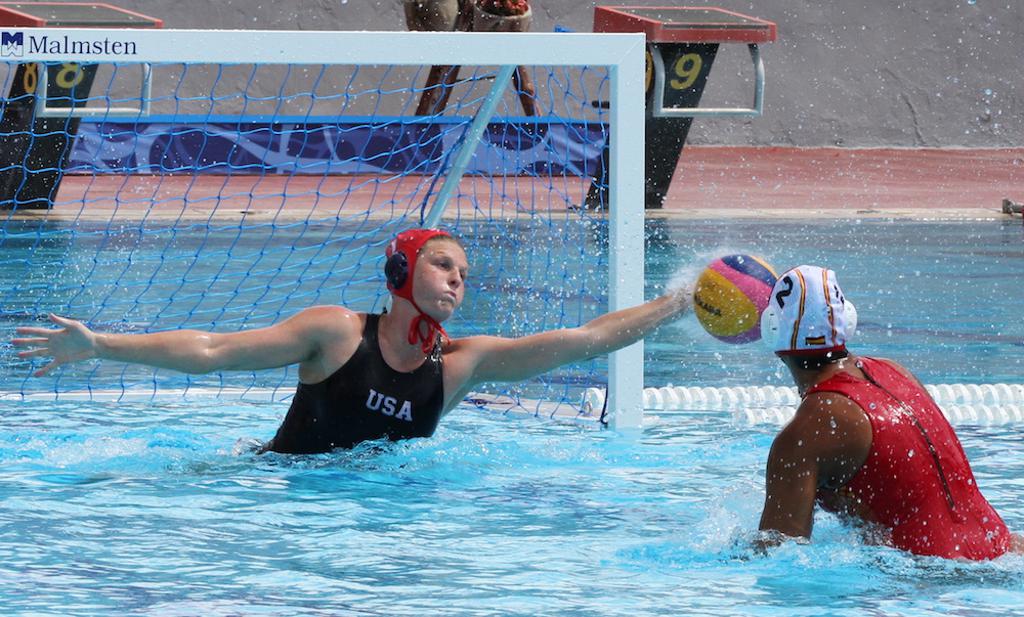 Amanda Longan of Team USA and the 805 Santa Barbara Water Polo Club, blocks a Spain penalty shot in the final three seconds of a group-play game at the FINA Women’s Water Polo Junior World Championship in Volos, Greece. The teams played to a 9-9 tie. (Pet

Goalie Amanda Longan blocked a five-meter penalty shot with three seconds on the clock to preserve a  9-9 tie for Team USA against Spain in a thrilling group-play final at the FINA Women’s Water Polo Junior World Championship in Volos, Greece on Tuesday.

Longan, who attends USC and is a member of the 805 Santa Barbara Water Polo Club, made her huge block after Denise Mammolito scored on a power play for the U.S. to tie the game with just 15 seconds left.  Ryann Neushul (Dos Pueblos senior) passed to a drving Paige Hauschild (San Marcos alum, USC freshman) and she drew an ejection.

Longan made 13 blocks in the game.

Due to goal against differential, Team USA finished in second place in Group D and now faces Serbia in Wednesday evening’s play-in round.

Team USA went ahead early with a Webber drive, but Spain responded with two straight goals to lead 2-1 with 1:25 left in the period. Val Ayala (Foothill High) and Neushul then teamed up to score goals with less than a minute to play, giving the Americans a 3-2 lead after the first quarter.

Johnson and Liebowtiz scored the first two goals of the second quarter for 5-2 advantage with 1:40 to go in the half. Spain responded with two straight goals for a 5-4 game at intermission. In the third quarter, Team USA got tallies from Liebowtiz and Weber for a 7-5 lead going to the fourth.

Spain used a hard perimeter press to battled back in the fourth, scoring the first two goals to tie the score at 7-7 with 3:10 to play. After the two sides traded goals the score was tied at 8-8 with 2:01 to play. Spain retook the lead for the first time since the first quarter on a score with :28 left to go up 9-8.

Mammolito tied it with her power-play goal.