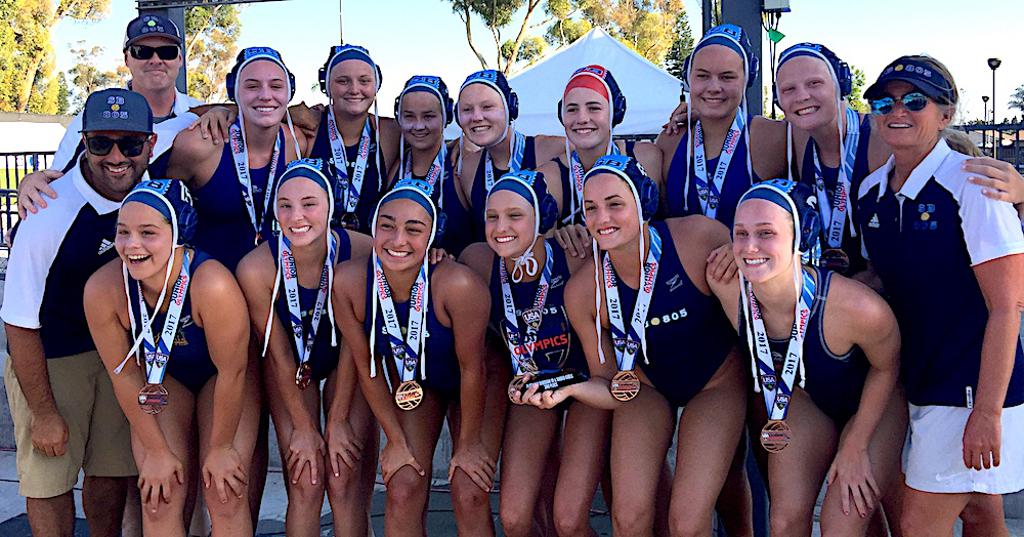 The 18-under team of the 805 Santa Barbara Water Polo Club took the bronze medal in the top division at the Junior Olympics. (Peter Neushul photo)

True to form, 805 Santa Barbara Water Polo Club advanced three teams to the Platinum Division semifinals at the 2017 National Junior Olympics in Irvine over the weekend.  The defending 14 and 16 national champions along with eight other teams undertook a four-day battle for Junior Olympic titles. At the end, 805 made the final four in three of the top four age brackets.

Asked which 805 team was most likely to take the podium before the tournament, head coach Connor Levoff pointed to the 12-under girls. "They are our best hope for gold,” he said. After a heartbreaking quarterfinal shootout loss to SoCal, however, the 12s barely missed advancing to their first semifinal in two years.

Instead it was the defending champions 14U girls who surprised. Led by coaches Kelsie Hendrix and Levoff, the 14s fought of an early loss to Laguna Beach and met unbeaten and top-ranked SoCal in Saturday evening's play-in quarterfinal.  The match ended with a dramatic shootout, where Faith Tedesco showed her mettle as one of the nation’s top youth goalies by making two blocks to eliminate the nation’s top-14 team.  The 14s fell to Laguna in the Sunday semifinal and then lost the Bronze Medal game to Rose Bowl.  National team members Abigail Hendrix and Rachel Ahumada starred for the 14s alongside Tedesco.

Santa Barbara’s 16s, the reigning Junior Olympic and National Club Champions, advanced to the semis with a quarterfinal defeat of Diablo on Saturday.  The 16s met a tough Rose Bowl team Sunday morning in the semifinals and suffered a lopsided 10-2 loss as their offense stalled in the first quarter.  Led by Abbi Hill, the 16s met Northwood in a hard-fought Bronze Medal match that ended with a sudden-death shootout and a loss for 805.

With their ranks thinned by injury and the loss of Paige Hauschild to the USA Women's Senior National Team at the FINA World Championships, 805’s 18s were “going to battle just to get a medal,” according to head coach Cathy Neushul.  The 18s fell to second-ranked SET in pool play but advanced to Sunday’s semifinal with a decisive quarterfinal play-in win over CHAWP water polo club.

The 18s fell to eventual champion 680 Sunday morning and then rounded with SET in a battle for bronze.  Led by Grace Raisin and Ryann Neushul and backed by stellar goal play from Sophie Trumbull, the 18s defeated SET in a back-and-forth battle that ended with an 11-9 victory and a bronze medal.

Sunday’s bronze medal for Kailie McGeoy (SBHS/Princeton), Brittany Prentice (SMHS/Michigan) and Toni Shackelford (DPHS/UC Irvine) capped a terrific club career. The trio won Junior Olympic Championships at 12U, 14U, and 16U levels during the storied careers with 805 Santa Barbara Water Polo Club and are graduating to anchor NCAA Division I programs in the Fall.

Other notable performances include Platinum division finishes for 10U girls (6th), 12U girls (5th), 16UB girls (7th) and 18UB girls (13th).  The Platinum Division is composed of the top 24 teams in the country.  Championship Gold are the next 24, followed by Classic Gold, Silver, and Bronze.

The 805 Santa Barbara Water Polo Club qualified 12 teams for the 2017 National Junior Olympics in what club director Kelsie Hendricks called among the club’s “most successful showings and one of the finest displays of sportsmanship that I have witnessed at the event.”